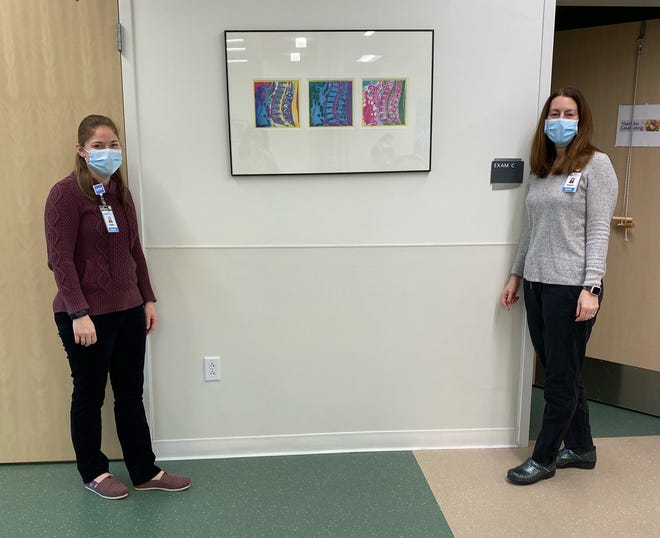 Joyce Mackey did everything right. The “bleach girl,” as she calls herself, made it her mission to wipe down everything at her workplace with a disinfectant solution when the COVID-19 pandemic first hit in 2020.

But in April 2020, she was diagnosed with the virus. And after almost two years and seven months of working with a neurologist, physical and occupational therapists, the Saugus resident has finally returned to work and a somewhat normal life.

“I was kind of surprised when I was first diagnosed, I was just so sick, I had all the symptoms,” Mackey said, remembering how she felt. “I had the GI tract issues, the pneumonia, I was so weak, aches and fever, I wasn’t able to get rid of the fever. I was so fatigued.”

Pneumonia sent her to the hospital, but despite the fluid in her lungs, she was not admitted. At home in Saugus, the virus spread through her household, sickening her daughter, husband and elderly mother. She watched her family recover while she was still fatigued, still achy, still unable to return to her normal life.

“I didn’t understand why I didn’t seem to be getting better,” Mackey said.

She couldn’t formulate a sentence, faded in and out of conversations, had difficulty finding common words she knew, fainted routinely, suffered from headaches and was extraordinarily sensitive to light and sound.

“I would fade in and out when people were talking,” Mackey said.

She wandered around in what she calls “a brain fog.” Yet her CT scans and an MRI of her brain showed everything was normal. Outwardly, she appeared to have recovered.

She was finally able to return to her job as unit secretary at Bear Mountain Healthcare in Reading in December 2021. But it took the work of a team of experts to accomplish that return to almost normal.

Apparently, Mackey is not alone.

What are COVID-19 long haulers?

In a JAMA Network Open article published in October, a review of 57 studies involving a quarter of a million people infected with COVID-19 revealed that more than half those infected with the virus suffered from long COVID-19 symptoms, regardless of the severity of their original infections.

Lingering symptoms for 50% of patients

As Mackey struggled to return to something close to normal, she consulted with her primary care physician. That provider referred her to a neurologist and together with a cadre of therapists, the medical community started making headway addressing and reducing her symptoms to a point where she can now function in her daily life.

It was time for a different approach.

The medical team at MelroseWakefield Hospital found Mackey’s symptoms mimicked a concussion, said Megan Kent, her speech therapist, adding the pain Mackey complained about in her head and neck was reminiscent of symptoms reported by car crash victims. Kent was one of two specialists, along with Caitlin Murphy, a physical therapist, assigned to work with Mackey.

In evaluating Mackey, the therapists noted the memory loss and mental fogginess, the headaches and the inability to complete everyday tasks. Mackey also suffered from overall deconditioning, pain, loss of muscle tone and balance.

Her therapists started her off slowly. They evaluated her symptoms and devised strategies to cope with the memory loss, the inability to focus.

Back to normal eased through therapy

“We would simulate everyday tasks,” said Kent. “We would start with a quiet environment, slowly turn up the lights, add new sounds, music playing in the background, doors opening and closing to mimic everyday life.”

Mackey, who traveled to the outpatient office in Wakefield at least twice a week from her home in Saugus to work with her team, had nothing but praise for the therapists.

“They were incredibly patient and understanding,” Mackey said.

She is one of about two dozen patients treated at MelroseWakefield who were suffering from similar symptoms.

“We don’t want people suffering in silence,” Kent said, noting one of her clients said she “’Felt stupid.’ No one believed her when she complained of her symptoms because she looked fine, physically.”

The team noted there could be a bigger population of people suffering in silence, putting off calling a doctor, hoping things will improve.

“I felt ashamed of myself for complaining because I know how much worse it could have been,” Mackey said. Part of her frustration was not knowing whether the mental fog would lift, whether the fatigue would ever go away.

“We work with occupational therapists, neuropsychologists, and neurologists specializing in cognitive function to help patients rehabilitate from the injury caused by COVID-19,” said Dr. Jason Maley, the director of the Critical Illness and COVID-19 Survivorship Program at Beth Israel.

“This includes rehabilitation approach that have been used for stroke and concussion, to strengthen memory, focus, attention, language, and other areas of impairment,” Maley said. “Patients are absolutely benefiting from this and many have made substantial progress or recovery from their long COVID with time and rehabilitation.”

Maley concurred many of the symptoms people experience are similar to what is seen after concussions or traumatic brain injury.

The symptoms  — difficulty with focus, concentration, short term memory, finding the right words during conversation, multi-tasking — have a substantial impact on people from all walks of life, including young, previously healthy people with no prior cognitive issues before having COVID-19, Maley said.

Tufts Medicine is a health system that is rethinking how academic and community centers, local and national businesses, and technology and service innovators can all work together. So that clinicians can deliver expert care where it's needed most. And so that we can bring wellness back to healthcare, one person at a time.